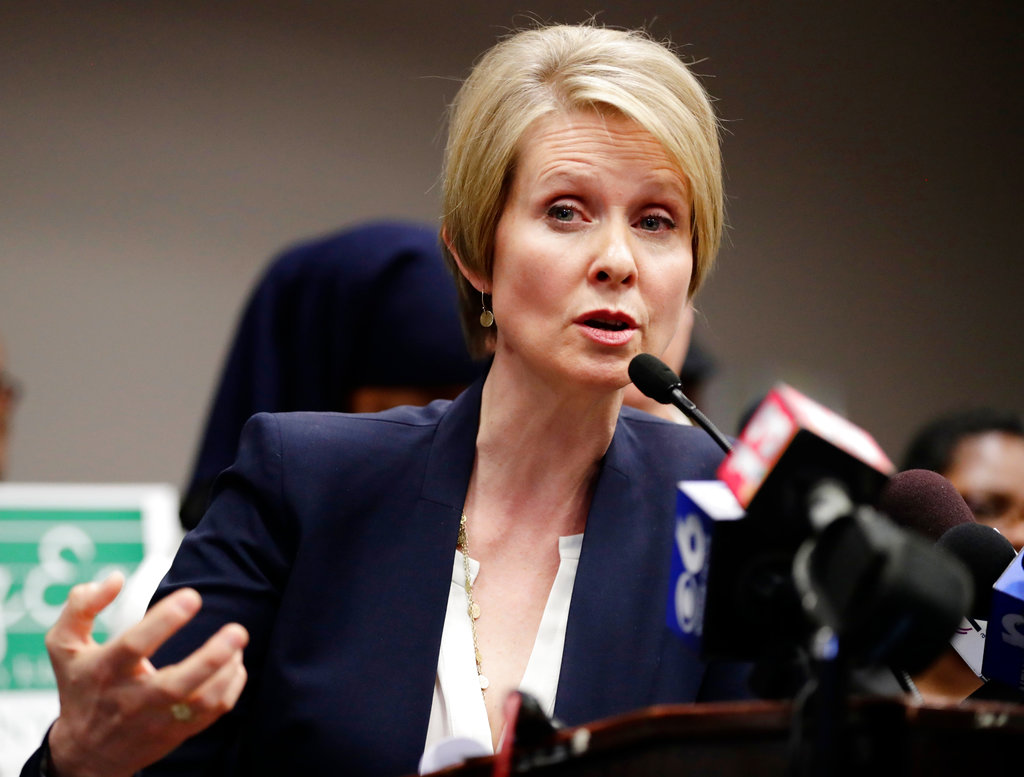 ALBANY, N.Y. — A week after telling two interviewers her support for legalizing recreational use of marijuana in New York was revenue-based, Democratic candidate for governor Cynthia Nixon said Wednesday that it’s now foremost a racial justice issue for her.

The “Sex and the City” star posted a 90-second video on YouTube in which she stated that it’s time New York joined eight other states and the District of Columbia in legalizing recreational use of marijuana.

“There are a lot of good reasons for legalizing marijuana, but for me, it comes down to this: we have to stop putting people of color in jail for something that white people do with impunity,” Nixon said.

A lot of you have been asking about my position on marijuana. Here it is. pic.twitter.com/iEKLHgClFN

The actor, who turned 52 on Monday, then goes on to say 80 percent of the New Yorkers arrested for marijuana are black or Latino. Nixon added that legalizing pot use for non-medical reasons would end “a key front in the racist war on drugs” and generate hundreds of millions of dollars of tax revenue for the state through legal marijuana sales.

According to 2017 statistics compiled by the state, blacks accounted for 48 percent of arrests in New York City for the lowest level of marijuana possession, while Latinos accounted for 38 percent, compared to 9 percent for whites.

Nixon said during an interview on Wendy Williams’ nationally syndicated TV talk show that marijuana should be legalized to “capture some of that revenue” but she didn’t mention race as a reason to legalize it. In an interview conducted a few days later with The New York Times, she referred to legalized recreational marijuana use as a “moneymaker” and a “justice issue.”

The Emmy, Tony and Grammy winner entered the governor’s race last month to challenge two-term incumbent Andrew Cuomo in September’s Democratic primary. Much of her early campaign efforts have focused on black and Latino communities in New York City, traditionally a stronghold for the Queens-born Cuomo.

A group advocating decriminalization of pot in New York supports Nixon’s contention that there’s a stark disparity in the number of whites busted for marijuana crimes, compared to minorities.

Bills to legalize recreational marijuana use have stalled in New York’s Legislature, where Democrats control the Assembly and yearslong Republican control of the Senate is likely to shift to Democrats this year. Lawmakers supporting legalization say the potential tax revenue stream is considerable since it’s estimated that New Yorkers spend $3 billion a year on marijuana.

Cuomo has been dubious about legalizing pot beyond limited medical use of non-smokeable forms. But he has directed the state Department of Health to conduct a study on the health, economic and criminal justice impacts legalized marijuana could have across New York, especially now that neighboring Vermont and Massachusetts have legalized it.

“We announced months ago that we were going to study the legalization issue precisely for that reason,” Cuomo told reporters Wednesday at a Long Island event. “You have Massachusetts, you have New Jersey talking about it — that would be a fundamentally different situation for the state of New York.”

We got the #Receipts, @NYGovCuomo. Last year you attacked marijuana as a “gateway drug.” pic.twitter.com/jB5KbipBfC