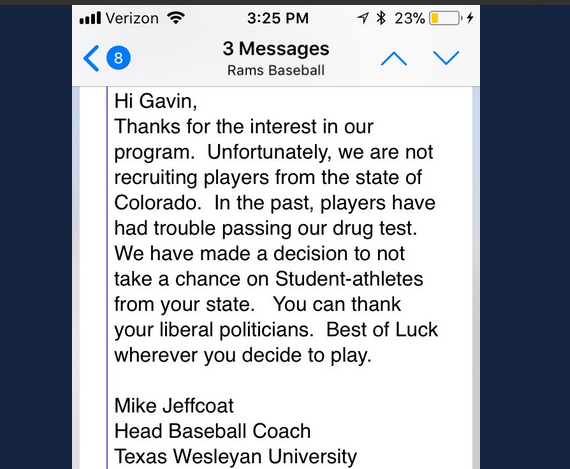 Fun fact: Colorado teens are all a bunch of dope-smoking hippies.

At least, that’s what Texas Wesleyan baseball coach Mike Jeffcoat seems to think. And that’s a shame, really, because there are some dynamite high school baseball players in Colorado, and Wesleyan won’t have the privilege of signing any of them.

“Thanks for the interest in our program. Unfortunately, we are not recruiting players from the state of Colorado. In the past, players have had trouble passing our drug test. We have made a decision to not take a chance on Student-athletes from your state. You can thank your liberal politicians. Best of Luck wherever you decide to play.”

That may be Jeffcoat’s personal stance, but he does have one Colorado player on his roster, freshman Logan Bistrup of Arvada’s Pomona High School. Since recreational marijuana became legal in Colorado in 2014, Wesleyan, an NAIA program located in Fort Worth, has had only one other player from the Centennial State on its baseball roster, Eaglecrest graduate Aidan Laurini.