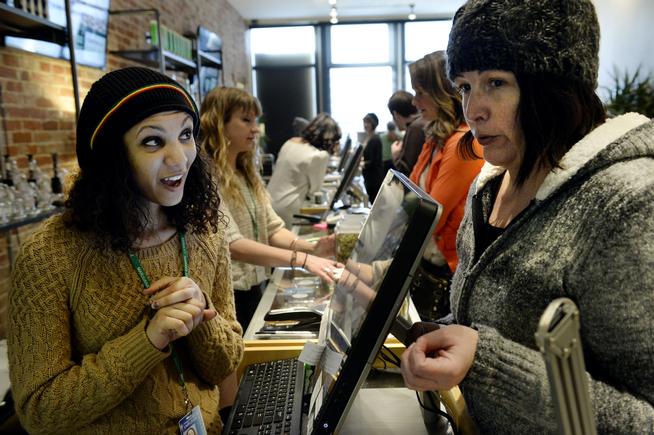 DETROIT — With medical marijuana on the cusp of becoming a bona fide industry in Michigan, the people who educate customers and sell the product in dispensaries — budtenders in marijuana lingo — will be in high demand.

Across the state, as dispensaries prepare to open, owners will be seeking hundreds of workers to be the sales force and consultants for medical marijuana patients. And this won’t be your typical retail job.

While a doctor approves patients for a medical marijuana card, it’s the budtenders who will help them figure out which marijuana product might work best for them, the Detroit Free Press reported. Different strains of marijuana produce different effects, for example. And marijuana-infused edibles, concentrates and drinks take different amounts of time to kick in.

The budtender helps customers determine what might work best for them. Classes being taught both in a classroom setting and online are designed to teach those wanting to enter the business the skills of the trade.

“Edibles break down differently in the system, so I’ll talk about how long it takes an edible to be active or noticeable in the system and how long it stays in the system,” said Farrah Vorhauer of Durango, Colorado, who, along with Rosie Yagielo, one of the owners of HempStaff, a Florida-based company that provides cannabis classes, traveled to Romulus in February to teach two, four-hour classes to more than 50 Michiganders who are hoping to get a job in medical marijuana sales.

The women teach about the plant and how the three main families of cannabis — indica, sativa and ruderalis, along with hundreds of strains derived from them — work to treat different symptoms. Sativa, for example, is better for stimulating appetite, reducing nausea and energizing while indica can be used as a sleep aid and is a pain and stress reliever. The less abundant and cultivated ruderalis has a faster growing cycle but lower concentrations of the psychoative ingredient THC. It’s sometimes crossed with sativa or indica to encourage faster grows.

The women also teach about cannabanoids — the class of compounds in cannabis — many of which are used in creams, oils and capsules to treat chronic pain without the “high” often associated with marijuana. Many of these products don’t contain mind-altering THC.

“It’s the only time we get to choose our own medication,” Yagielo said. “The doctor gives you a recommendation . (but) you get to choose what you put in your body.”

In addition to the classes in person, there are dozens of online courses for people looking for budtender training, ranging in price from $119 to $300. A certificate usually comes at the end of the training, but the piece of paper isn’t a requirement or a guarantee of a job.

Michigan’s sales for medical marijuana are expected to be more than $700 million when the market is fully developed, with that number rising significantly if recreational use is passed by voters and legalized this fall. The state Board of Canvassers is currently examining petitions to see whether there are enough valid signatures to put a recreational marijuana use proposal on the November ballot.

All of that translates into jobs. Currently, there are at least 165,000 workers in marijuana businesses across the country, according to MJBiz Daily, a newsletter that tracks the marijuana industry.

In Colorado, the most established marijuana market in the country with 1,031 dispensaries, 1,471 grow operations and 515 processors, 38,121 people have cannabis careers.

In the state of Washington, which has 465 dispensaries, 1,115 grow operations and 253 processors, 10,894 people are employed in the business, including 3,978 in dispensaries, according to the Washington State Institute for Public Policy.

And in Nevada, where recreational sales began on July 1, 2017, 6,700 people have jobs in the industry, including at the state’s 61 dispensaries, mostly in and around Las Vegas, according to the Nevada Dispensary Association.

The average wage for dispensary workers is $12 to $14 an hour, Yagielo said, but it has gone higher in both Washington and Nevada.

While Michigan has dispensaries that have been operating in a legal gray area since voters approved the legalization of medical marijuana in 2008, the number of employees working in those businesses isn’t known. That’s about to change when the state begins handing out licenses next month that will regulate and tax the businesses.

Angie Roullier hopes to become one of the plant’s most passionate ambassadors.

The West Bloomfield Township woman went from being nearly sidelined by symptoms of muscular dystrophy — spasms, fatigue, kidney stones and increasing weakness over 30 years — to becoming an avid supporter for medical marijuana use after it helped her manage her symptoms. She’s now a thriving entrepreneur, consulting with businesses hoping to break into the marijuana industry.

And once the Green House dispensary in Walled Lake gets its license from the state, she’ll become the team leader there, teaching the staff about budtending.

“This industry changes so fast and so often that you really have to stay on top of it,” she said.

Moderation is one of the things she preaches.

“My biggest thing with new cannabis patients is low and slow. If you take an edible and you just had a huge spaghetti dinner, it could take up to two hours for that to kick in,” she said. “And people get impatient and they think it’s not working, so they eat more and the next thing you know, it’s Tuesday.”

In their classes, Yagielo and Vorhauer not only deal with the properties of marijuana and the products derived from the plant, but about the professionalism needed to work in a medical marijuana dispensary.

“I spend a lot of time in that room trying to tell them be professional . don’t use the terms pot and weed,” Yagielo said. “Because walking into a dispensary, expecting it to look like a head shop with a big old leaf on your shirt, those days are gone.”

BDS Analytics, which tracks the marijuana industry, reported $9 billion in marijuana sales in 2017 and that was before California started its recreational market in January, which is expected to reach $3.7 billion in 2018.

While business owners have to undergo an extensive background check by the state, there are few requirements for the employees who work in dispensaries.

They have to pass a criminal background check by their employer. If they have no controlled substance-related felony convictions in the last 10 years, the prospective employee is good to go. Records of those background checks must be updated and maintained by the business owner and made available to the state during pre-licensure and subsequent inspections.

For people doing the training, their enthusiasm comes from experience.

Roullier, who already has developed 100 pages worth of marijuana information for her training manual, is ready to share her success. After dealing with the muscle spasms, fatigue and increasing weakness from muscular dystrophy that was first diagnosed when she was 16, she was ready to try something different.

“My kidneys were starting to shut down and my doctors told me that’s about right after 30 years of medication,” she said.

But without the medications, her medical marijuana provider told her there was a different path to pain free.

Roullier had smoked marijuana occasionally over the years and had gotten some relief from her symptoms, so when medical marijuana was approved by Michigan voters in 2008, she was one of the first in line to get a card that allowed her to use the cannabis legally.

“It took me about a year to wean myself off absolutely everything,” she said, referring to all the medications she had been taking. “I had been taking close to 12 pills a day — everything from beta blockers to opioids, which was no joke, that one was the hardest. Now when I go to the doctor,
I’m proud to have to only put cannabis in the subject line when I have to list my medications.”

The muscle spasticity is mostly gone, the Charley horses have stopped, her kidneys have resumed normal functioning and the fuzzy head has disappeared. “I don’t feel like garbage all the time.”

For Vorhauer, marijuana helped ease the pain from arthritis in her lower back, as well as help with anxiety attacks. She started shopping at a dispensary in Colorado six years ago and ended up taking a $10 an hour job two days a week at the store.

The part-time job turned into being the full-time manager at the dispensary, then taking a leadership position at a grow operation.

“I was a having a conversation with a friend of mine who asked what I wanted to do in the future and I said ‘I want to change people’s minds about cannabis,’ ” she said, adding she got the job offer from HempStaff at about the same time.

“I can’t believe they’re paying me to educate people,” she said. “To do it on a larger scale is really amazing.”

To work in the marijuana business at any level is a goal for Tristan Kohlhoff, who flips houses in Detroit, but returns home to Standish on the weekends.

He took the HempStaff class in Ohio last year, but also went to the Romulus class for a second go-around in February, with the goal of learning more about Michigan’s new regulated market and the best way to determine what type of marijuana a cardholder needs. He’s working with a dispensary in Omer, a tiny town in northeast Michigan that prides itself in being the state’s smallest city with a population of 313, as it gears up to open if and when it receives a license from the state.

“You could really help people by implementing the right doses,” he said. “You start out at $10 an hour, but you don’t do it to chase the money. It’s really about helping people get a better quality of life.”

For Nicole England of Southfield and Kim Phillips-Wood of Macomb Township, the class became a part of the cousins’ journey to educate themselves before totally changing careers and embarking on a new venture as a marijuana processing business, which turns marijuana into edibles, creams, oils, capsules and suppositories.

“We’re still in the beginning phase of this. We’re just doing our homework and the next step is to learn how to make the products,” said England, who was recently laid off from her job as an IT program manager. “This is not the first time I’ve been laid off, so this would give me the opportunity to go in a different direction that’s going to be a booming adventure.”

Phillips-Wood echoed that sentiment, saying she wants to become an entrepreneur “and make all the decisions.”

“I was actually doing business management for years . but I’ve been thinking what do I like? What’s my passion? And then this came around, and I thought this is something I could do.”

And if they get into business now, the cousins hope they will be able to capitalize on an even bigger boom if marijuana gets legalized for recreational use.

“To get out in front of it is what’s really exciting too,” Phillips-Wood said. “There is a lot of money to be made.”